10 Tips All Lazy-bones Should Know to Get Off Bed Instantly!

Shana Lebowitz did a research using Reddit on overcoming laziness and manage to compile some of the easiest ways to set yourself on a path towards a world of productivity. 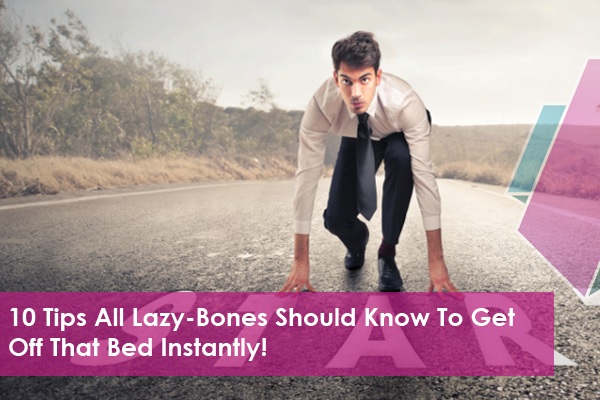 Here are some daily routine that can help you start getting stuff done and overcome laziness once and for all.

Being productive for 10 minutes is better than not being productive at all. So set a 10-minute alarm and figure out what you need to do within that 10 minutes but make sure you do something that requires you to move. Even though you don’t like doing the task, you do it anyway for 10 minutes. Once you’re already involved, it’s less tempting to quit.

Focus on accomplishing easy and simple tasks first. We are more likely to procrastinate if we focus on finishing big tasks first because we’ll end up getting distracted. Smaller tasks won’t take much time or effort to solve.

Here is Our Product recommendation

The word ‘exercise’ might not exist in some people’s dictionary but it’s a great way to start being productive.  Exercising every morning before we start our day can get our blood pumping and make us feel wakeful and energetic instead of being sleepy and exhausted all day.

Studies show that being around other people who are working hard can motivate us to work hard too. When we’re in an environment where everyone is super-focused, we tend to mirror that behavior. So try going to new places to do work such as libraries, coffee shop or other public spaces.

The people around us also influences the way we behave so it’s better to surround ourself with people are always productive. Pick people with a track record of achieving difficult things and communicate with them frequently. It will motivate us more to do something when we know someone else is going to be there too.

Turns out changing the way we dress can also influence our productivity. When we put on our clothes, it is common for our moods are affected by the type of clothing we wear. Whether it’s ‘professional work attire’ or ‘relaxing weekend wear’, the brain makes us behave according to that style.

Before we start doing anything, it’s better if we sit down and make a list of what we need to do. For bigger tasks, try to break them down into smaller chunks so it’ll be easier for you to execute it. Having a finite list of problems is much better than having an illogical feeling that everything is wrong

Usually nothing gets done when we think too much. The next time we contemplate on which task to start with, the first task that pops into our head is the one we should do first.

If it takes less than two minutes, just do it. Decide which task that can be dealt within two minutes or less. It can be as simple as washing the dishes or picking laundry off the floor.

Never lose track of our momentum, choose a task and make it a daily habit and never stop even if it’s just for one day only. Learn to discipline yourself, it may take a while get used to a new habit but over time we’ll be sure to master it in no time.